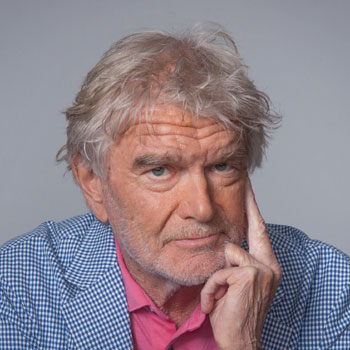 Hartmut Esslinger was the first designer to bring human-driven, high-touch design to world of complex hardware and software technology. Business Week, who featured him on the cover in 1990, called him the most influential American industrial designer since the 1930s and the first Superstar of High-Tech Design.

In 1969, at age 25, Hartmut Esslinger founded frog design in Germany and expanded the company to the United States in 1982. Together with his wife and business partner Patricia Roller he created the world’s most prominent and successful strategic design agency. In 2005, frog design was sold to venture backed Flextronics, and eventually to Kohlberg Kravis Roberts & Co., and Hartmut Esslinger and Patricia Roller remained investors. Today, frog design employs about 400 strategists, designers and technology specialists in numerous studios around the world.

For the last 38 years, Hartmut Esslinger has worked with some of the most prestigious global companies. For example, he helped companies such as Sony, Apple, Louis Vuitton, SAP, Lufthansa and Microsoft to convert their technological competences and entrepreneurial desire into emotionally appealing global brands.

Hartmut also engages in educating and mentoring young designers. He is a founding professor of the Hochschule fuer Gestaltung (College for Design) in Karlsruhe, Germany, was a professor for convergent industrial design at the University for Applied Arts in Vienna, Austria (2006 – 2011), and is a professor for strategic design and innovation at Fudan/SIVA University in Shanghai (since 2011). He received an honorary doctorate in Fine Arts from the Parson New School of Design, New York (1994) as well as various lifetime achievement awards around the world.